WE MAKE A MORE VITAL FUTURE POSSIBLE FOR EVERYONE.

All about stem cells 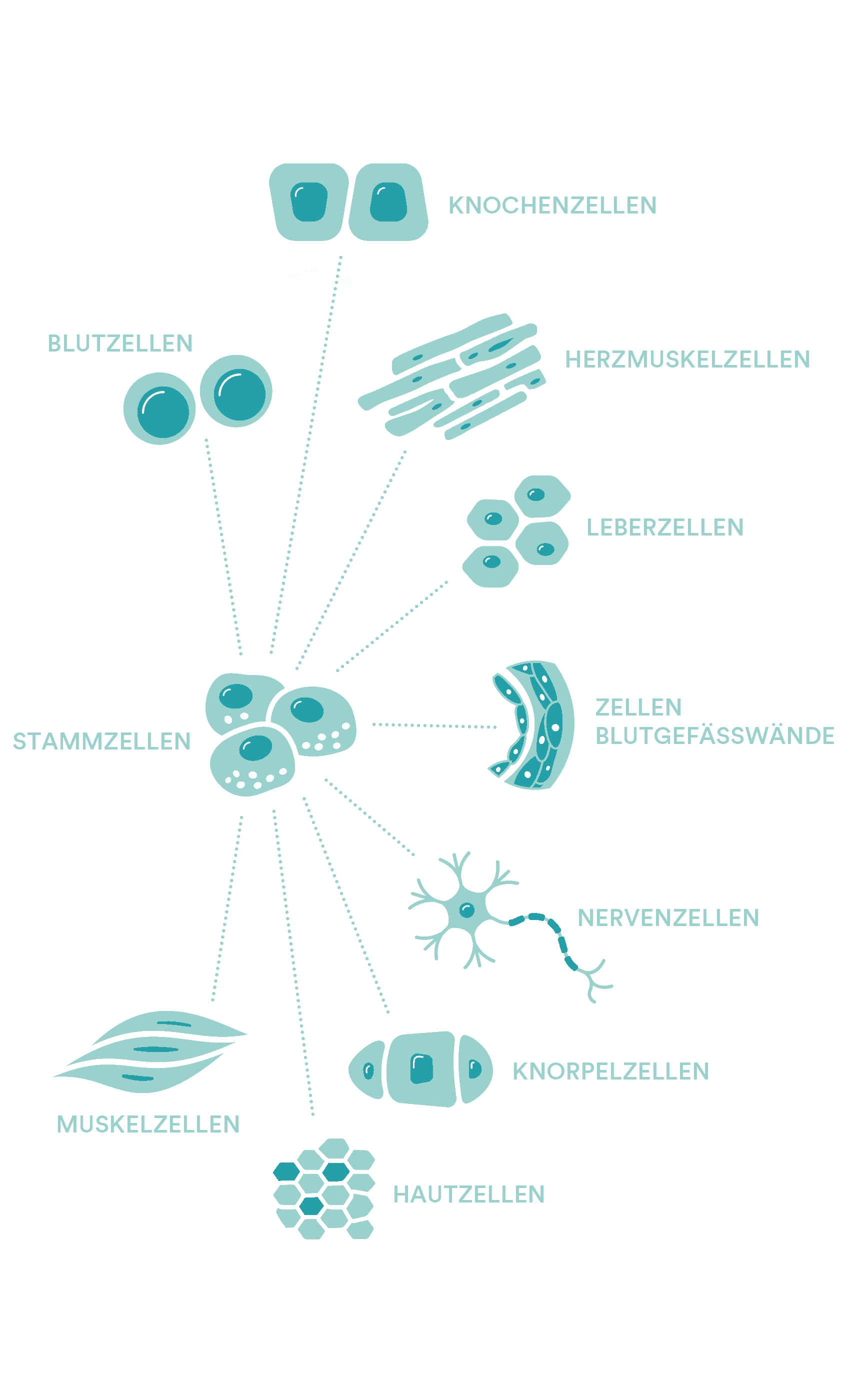 What are stem cells?

Stem cells are often referred to as the “building blocks of life”, as they build, repair and regenerate human body tissues. An adult human has around 100 trillion individual body cells, which can be divided into 200 different cell types. They all emerge from a single stem cell - the fertilized egg cell. That a whole person - a new living being - develops from this in just 40 weeks of pregnancy is a miracle of nature.

After the egg cell has been fertilized, cell division begins at a rapid pace. Within three to four days, the zygote develops into the blastocyst - and from it the embryo. Within this short period of time, stem cells are “all-rounders” that are able to develop into any specific cell type. This ability diminishes as the embryonic cells divide. Cell development becomes a one-way street in which each cell type has a specific function. First, embryonic stem cells become fetal stem cells and later on adult stem cells. These adult stem cells can renew inflamed or injured organs and body tissues to a certain extent and thus repair damage. In doing so, they take on an important task in the human body up to its death.

Two Siblings and a great success

At the age of three, Jan from Lower Saxony fell ill with aplastic anemia, a rare disease in which blood formation in the bone marrow fails. When Jan's mother became pregnant with her second child, the doctors didn't need much persuasiveness to win the parents over to a stem cell deposit from the sibling's umbilical cord. Because siblings are ideal donors for stem cell therapy.

The future is in Switzerland

As a full-service provider (cell bank, stem cell bank) with around 100 employees, we provide services from removal through processing and preservation to professional delivery.

Umbilical cord blood is of great medical interest because it has a high concentration of haematopoietic stem cells. These stem cells stimulate blood formation in the organism and can regenerate broken cells. Blood formation disorders such as leukemia or anemia, but also diseases of the immune system, can in many cases be successfully treated with the help of umbilical cord stem cells

In addition to collagen and hyaluronic acid, umbilical cord tissue contains a large number of mesenchymal stem cells. These stem cells are particularly important for regenerative medicine, as they can repair and regenerate broken tissue. If these cells are obtained from the umbilical cord, they are particularly young and vital. They are also extremely flexible and can form different cell types within one tissue type.